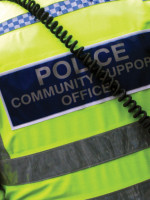 The Welsh Government is committed to delivering safe and strong communities in Wales. As part of that commitment, it funds 500 Community Support Officers (CSOs) who are additional to those included in the planned policing levels funded from other sources.

The four Welsh Police Forces and British Transport Police have each been awarded a share of £16.8m to cover the costs of the additional CSOs in their areas.

“This funding represents a significant investment in community safety at a time of unprecedented pressure on public sector budgets, and on police funding in particular.

“They play a pivotal role not only in making our communities safer, but in making them feel safer.”