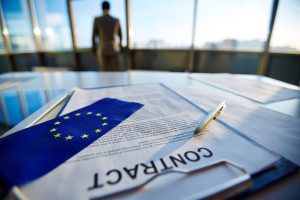 Voting on the EU referendum will take place on 23 June. On this day UK citizens will be asked ‘Should the United Kingdom remain a member of the European Union or leave the European Union?’ While the media is filled with opinions on the subject, unbiased business analysis is harder to come by. To fill the gap, BiP Solutions journalist Julie Shennan examines the referendum and its potential implications for SMEs.

Why should SMEs care?

The majority of the UK economy is made up of small and medium-sized enterprises (SMEs). In 2015 the UK Department for Business Innovation and Skills found SMEs accounted for 99.9% of all UK private sector businesses. These SMEs had a combined annual turnover of £1.8 trillion, making up 47% of the country’s private sector turnover.

SMEs are the backbone of UK business, so they have a vested interest in the way the country is run. The outcome of the EU referendum has the potential to change the way the UK deals with exports, trade arrangements, business finance, and procurement legislation, all of which will affect SMEs.

Despite this there is a fear that smaller businesses lack adequate information on the EU referendum.

“Businesses of all sizes must prepare themselves for the referendum by educating themselves. Big businesses have done this quite well; however, SMEs are still ill-prepared.”

This opinion is echoed in the uncertainty of a 4 April YouGov poll, which showed that 23% of people surveyed said they ‘don’t know’ if the UK should remain in or leave the EU.

Why all the confusion?

This uncertainty stems from the unprecedented situation that would arise should the UK decide to leave the EU. If a Brexit was voted for, then the UK would have to renegotiate its trade deals and procurement laws. Brexit leaders argue that this would open up procurement innovation and efficiency, while those on the pro-EU side claim it would cause instability and loss of business.

At the forefront of the referendum debate are exports. Brexit leaders argue that the EU membership fees paid by the UK outweigh the UK gains from exports to the European Economic Area (EEA). However, HM Treasury’s latest European Union Finances statistics appear to contradict this argument.

These figures show that in 2015 EU membership cost the UK £8.473bn (net sum). However, this cost was outweighed by the value of UK exports to the EU in December 2015 alone, which reached £10.4bn (HMRC UK Overseas Trade Statistics December 2015).

EU export figures will vary, but the trend is unlikely to reverse completely. This shows European Union membership brings the advantage of European Economic Area (EEA) trading, which is key to UK business growth.

Growth opportunities within Europe are particularly important to UK SMEs, as a 2015 Western Union Business Solutions’ International Trade Monitor Report showed 80% of UK SMEs that did export did so within Europe.

This trend is, however, not reflective of the wider UK export picture; as the latest (February 2016) Office of National Statistics UK Trade Statistical Bulletinshowed, between November 2015 and February 2016, UK exports to non-EU countries totalled more than those to EU countries (£36.0 billion compared to £33.0 billion).

This highlights the opportunity for greater SME trade beyond the European Union, and shows the appeal of a Brexit in which the UK could form autonomous international trade partnerships, without having to negotiate with other EU members.

Such autonomy would, however, come at the expense of EU single market membership, as all EEA trade partners must uphold EU laws on trade and freedom of movement.

Former Legal Counsel of the European Council and Director General of the EU Council Legal Services Jean-Claude Piris reflected upon this dilemma in his 2016 report, If the UK votes to Leave.

He explained: “In a referendum, Britain will have to choose between national sovereignty and unimpeded access to EU markets.”

As well as access to EU markets, EU membership brings with it subsidies/ business grants which many UK SMEs rely upon. Stay campaigners have highlighted that the loss of these sources of income would have a knock-on effect on the UK economy.

Northern Irish Agriculture Minister Michelle O’Neill said “In terms of Agriculture and Rural Development, we will have drawn down over £1.9 billion of European funding between 2014 and 2020. I fear that a significant reduction in direct support would see production go into free-fall.”

However, other forms of SME finance may not be so heavily hit by a Brexit, as the Centre for European Policy Studies Director Daniel Gros reflected in theGuardian newspaper.

He said: “Finance to SMEs – and households – is usually provided by local retail banks. In this sense there is no reason why leaving the EU would have a material impact on the availability of finance for SMEs.

“Part of the UK’s retail banking system is owned by EU banks. This investment would of course have a different legal status after Brexit, but presumably the change in legal status would not have a direct impact on retail operations, such as lending to SMEs.”

Another point of uncertainty surrounding the EU referendum is the impact it will have on procurement legislation. Leave campaigners argue that current EU legislation is too bureaucratic and is particularly costly for SMEs to implement. This argument is backed by a European Commission 2015 estimate that “complying with [EU] regulations can cost a small business 10 times as much per employee as it costs a large company.”

However, Stay campaigners are quick to highlight that burdensome procurement legislation is unlikely to change under a Brexit as the UK has enshrined it in national law, such as the UK Public Contract Regulations.

Professor Christopher Bovis said: “Most of the European rules (on things like business takeovers and acquisitions) are heavily influenced by the UK procurement codes of practice. It is impossible to claim that a Brexit would cut red tape, as the UK helped to create this red tape.”