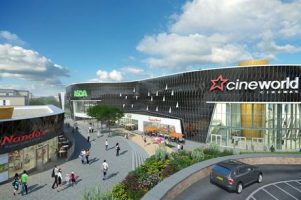 Councillors have approved plans for a mixed-use development featuring a 7,100 square metre supermarket and 132 flats in north-west London, despite an objection by a neighbouring authority.

Members of the London Borough of Hilligdon’s planning committee granted full permission for the development in South Ruislip on Tuesday evening.

The application, from developer Citygrove, proposes a 7,100 square metre Asda store, an 11-screen cinema, a petrol station, five restaurants and housing on the site of a vacant former food depot, Arla Foods.

According to a planning officers’ report, the site “adjoins” South Ruislip town centre.

A previous similar application for the site by the same applicant was refused in April because of fears of the impact on nearby town centres.

The new scheme would provide a smaller supermarket and has an “improved” site layout, the report says.

According to the report, the scheme would create about 536 full and part-time jobs, of which “many … will be made available to local people”.

Neighbouring Harrow Council in its submission said the “leisure element of the scheme is inappropriate for an edge of centre location and contrary to London Plan policy”.

It went on to raise concerns that the development “would be likely to adversely impact on the health, vitality and vibrancy of Harrow town centre”.

But Hillingdon Council officers concluded: “Despite the potential of the proposal to alter the hierarchy of town centres and on in centre committed development, on the basis of the submitted evidence, officers are of the view that the proposal would give rise to strong economic benefits for the local area.

“Significant economic benefits would flow from this proposal, and that these would outweigh any disbenefits arising from the limited conflict with the development plan.”

The National Planning Policy Framework’s sequential test requires planning authorities to prioritise centrally located retail and leisure developments ahead of those outside or on the edge of towns.

The report states that there are no other sites identified “that would be sequentially preferable to the application site”.

It went on to say that any increase in traffic and parking would not be enough to create an “unacceptable impact” on the surrounding area.

The council has asked for 10.82 per cent affordable housing level, below the policy requirement for 35 per cent.