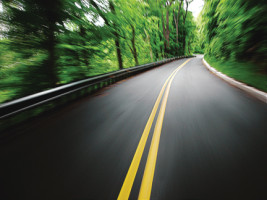 A new high volume pump that was used for the first time earlier this month to tackle flooding on the A1 is estimated to have saved the North East region’s economy half a million pounds.

Contractors for Highways England, A-one+, pumped approximately 2.5m litres of water, the equivalent to an Olympic sized swimming pool, from the A1 at Catterick on Wednesday 7 October into the River Swale.

It is estimated the flooding would have cost the economy £587,000 more in time and delays if standard pumps had been used. But thanks to the high volume pump, which is quicker and safer to deploy and is capable of pumping larger amounts of water, the road – which was closed in both directions – was cleared in less than ten hours.

In 2012, the northbound A1 at Catterick was closed for just over two days after heavy rain overnight flooded the road and left it impassable.
Highways England is the only authority apart from the fire service to own a high volume pump of this type.

Located at Bradbury, the pump has to be operated by a specially trained team. It can be set up in less than an hour to clear thousands of litres of water from flooded areas and can be deployed by Highways England anywhere in the UK in the event of severe flooding.

“Last time the A1 at Catterick flooded back in 2012 it took just over two days to clear but thanks to the new high volume pump it took us less than ten hours, saving the economy an estimated just over half a million pound in time and delays.

“Luckily incidents like this are rare but, thanks to the new pump, we were able to remove 2.5 million litres of water.

“Our focus is on keeping traffic – and therefore the country – moving. This is a major step forwards in tackling flooding and limiting disruption on the network, minimising the impact on the region’s economy.”