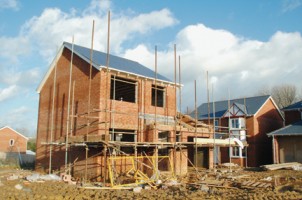 During a visit to the Prince of Wales Avenue site, the Minister saw first-hand how £531,000 of Welsh Government Social Housing Grant funding is being used to develop the nine two bedroom apartments, two of which are being specifically adapted for wheelchair access.

The scheme cost which totals £1m is being developed by Pennaf Housing Group in conjunction with Flintshire County Council and is due to be completed by the end of January 2014.

The complex will be named ‘Cwrt yr Ysgol’ which was decided by pupils at Ysgol Gwynedd Primary School in Flint and marks the fact that the former Youth Centre on the site originally housed the school dining canteen.

“This is yet another great example of how Welsh Government funding and collaborative working is helping provide new affordable homes for local people.

“I’m pleased to hear how this investment through the Social Housing Grant will convert a derelict building into nine new housing units. This is in addition to the funding we provided through our ‘Houses into Homes’ scheme which has brought an entire terrace back into residential use on nearby Chester Road.

“These developments are vital in meeting the housing needs in Flint and providing a boost for the local economy.”