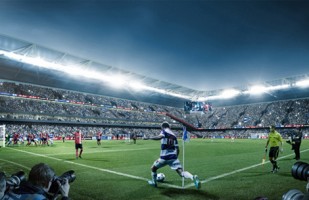 Queens Park Rangers Football Club have unveiled plans for a new 40,000-seater stadium in the heart of a semi-industrial district of west London that is earmarked for major regeneration. In a statement issued this morning, QPR announced that it has "concluded a letter of collaboration"with the Greater London Authority and the London Borough of Hammersmith and Fulham, to"bring forward an early and very significant private sector investment in the Old Oak Common regeneration area". The club, with its partners Stadium Capital Developments, are acquiring "significant land holdings in the area and have entered into exclusivity land arrangements with Network Rail and the Genesis Housing Group". The scheme has the provisional title of "New Queens Park", the statement said. London mayor Boris Johnson has been working with the London boroughs of Hammersmith and Fulham, Brent and Ealing on plans to develop up to 24,000 new homes in the area, linked to proposals to build a "super hub" HS2 and Crossrail station by 2026. In November, Johnson said that he would look to set up a mayoral development corporation, with planning powers, to support the regeneration of the Old Oak area. Johnson said today that QPR’s proposed stadium could be a catalyst for the long-term transformation of Old Oak Common. He said: "The construction of a new sports stadium within the regeneration area could prove to be a real shot in the arm as we look to create an entirely new city quarter and make Old Oak Common the King’s Cross St Pancras of west London." QPR chairman Tony Fernandes said: "Loftus Road is – and always will be – a special place for the club and our supporters, but we need more than an 18,000 capacity. "With no option of expanding here, we have to look elsewhere and we welcome the mayor’s and Hammersmith and Fulham Council’s commitment to regenerate the area, which includes an option to develop a new stadium at Old Oak as a key catalyst to bring forward redevelopment, cementing our future in this part of west London." Property firm Savills is advising QPR on planning.