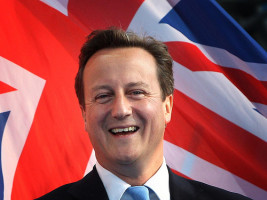 Speaking at an event held at Downing Street, the Prime Minister said more than 40,000 jobs in the UK’s food and drinks industry will be safer inside a reformed European Union.

The event, part of the GREAT Britain campaign to drive UK exports, saw leading food and drink companies from across the country, including Welsh suppliers Anglesey Sea Salt and Dunbia meats, show off their best produce.

The Anglesey Sea Salt Company produces Halen Môn Anglesey Sea Salt, which is a Protected Food within the EU. This means that only sea salt from a specific area on the Menai Strait between Anglesey and mainland Wales, produced in a certain way, can be sold under this name across the EU. Employing 22 people, its exports make up over a third of their business, with nearly half of those going to the EU.

Dunbia supply meat around the UK and the EU, employing 4,000 people across the country. Around £20m of their business comes from exporting to the EU, with Welsh Lamb making up over a quarter of this market. The Welsh Lamb they export is also a protected food name across the EU.

Nationally, the UK’s food and drink manufacturing industry supports 440,000 jobs and made £11 billion in EU exports for the UK economy last year – and the Prime Minister warned that this could be put at risk if the UK votes to leave the European Union on 23 June.

If the UK were to leave the EU, exporters would face crippling tariffs to sell their goods to Europe— such as up to 70% for beef products – costing producers around £240million per year. EU tariffs on cheese could cost £153m a year, cereal exports could be hit with a £40m bill and lamb products could face tariffs as high as 42%.

Meanwhile the loss of European protected geographical status would be another blow to the industry. 73 unique UK foods and drinks benefit from European protected geographical status. This protected status helps safeguard some of Britain’s best-loved great British produce from imitation – from cheese made on Orkney, rhubarb from Yorkshire, to the world-famous Cornish Pasty and helps generate revenues of £900 million.

“Today I was proud to host some of the finest food and drink producers from across Britain. Their products are popular not just here but across Europe and many of them do significant amounts of trade with the continent. But leaving the EU will rob them of the level playing field and the free access to trade that they currently have.

As we get closer to 23 June and this crucially important referendum, I hope people will focus on what as a country we will get out of staying in a reformed EU and what the costs could be of taking a leap into the dark and choosing to go out on our own. We know that Britain’s families will be poorer if we left – losing out on £4,300 a year.

And the great British food and drink manufacturers I met today are clear that they don’t want to gamble their businesses and their employees’ livelihoods on the roll of a dice that leaving the EU would be.”