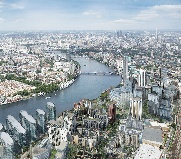 Boris Johnson has approved a Ballymore masterplan to regenerate a rundown riverside area of west London.

The masterplan for Ballymore’s Brentford Waterside scheme (pictured) was drawn up by a design team including practices AHMM, Glenn Howells Architects and Maccreanor Lavington.

The masterplan has been approved by the mayor after receiving the thumbs up from the local councillors in Hounslow last week.

It is designed to transform an area of waste land between Brentford High Street and the Grand Union Canal.

The masterplan provides for around 1m sqft of development including nearly 900 homes, most of which would be one or two bedroom flats, but also including duplexes and townhouses. The plan also features shops, including a new supermarket, and a small amount of commercial floor space.

Glenn Howells have designed the first phase of the 11-plot master plan, comprising 66 two-bedroom apartments, each of which will feature large balconies overlooking the canal.

AHMM has been responsible for the design of plot C, which is meant to anchor the development with a mix of residential, leisure and retail, using existing warehouses.

Maccreanor Lavington will design a mixed-use building at the Brentford High Street end of the development, featuring a mix of retail at ground level with a five-to-seven storey apartment buildings on top.

In addition, landscape architects Grant Associates have designed a network of lanes, bridges and waterside landscape spaces that will link the development to the new high street and the canal.

The choice of a wide variety of architecture is intended to reflect the richness of the existing site, with the use of materials designed to complement the brick Victorian warehouses and industrial buildings that populate it.