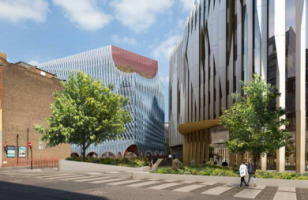 Specialist developer 4 C Hotel Group has unveiled plans to build a major hotel, office and resi project on the edge of the City in London.

The 460,000 mixed-use scheme will be built in the booming Aldgate area and be promoted as an eastern gateway to the City.

The developer plans to build a 200,00 sq ft office block and overhaul and reclad two large existing office buildings to create a 190,000 sq ft hotel on an area know as the Minories Estate.

Demolition contractor McGee is lined up to clear the site for the new office building at 62-64 Aldgate High Street.

The office block has been designed with striking cladding and a complex vaulted structure at street level to create arched walkways in red-pigmented concrete.

The massive scheme will also include a 15-storey block of 87 flats on the 3.3 acre site, which was bought by the group for £23m just over a year ago from administrators of the Beetham Group.

Two existing 1980s brick office buildings will be stripped back to the structural frame and reclad to create a 300-bed hotel for Hamilton by Hilton Hotel, which has been designed by Dexter Moren Associates.