Lendlease will now deliver the transformation of the 17ha Birmingham Smithfield site. Located in the heart of the city centre this redevelopment project that will reposition the city on an international stage.

A contractual joint venture will be set up with the City Council to create an urban quarter that includes a new home for the city’s historic Bull Ring retail markets, a unique family destination including a leisure and cultural offer, a new public square, integrated public transport and more than 2,000 homes with a public park and community facilities. 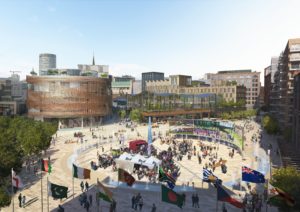 The development of Birmingham Smithfield is part of the city’s Big City Plan, launched in 2010, which sets out a 25-year vision to grow the city centre by more than 25%. As one of the areas of transformation, Birmingham Smithfield is located directly adjacent to the Bullring and New Street Station; and will be a short walk from the new High Speed 2 City Centre Terminus Station which is set to open in 2026.

Councillor Ian Ward, the Leader of Birmingham City Council, said: “We are extremely excited to be working with Lendlease who are an internationally leading developer with a proven track record of bringing forward major development schemes. The delivery of Birmingham Smithfield will be a major boost for Birmingham. With the new cultural and leisure attractions, the public realm, new homes and retail markets the development will appeal to both national and international audiences. Alongside these fantastic new facilities, the development will also deliver substantial benefits for the people of Birmingham. Lendlease have committed to invest in the local community and create 1,000s of new jobs and training opportunities. This scheme will create a legacy for the citizens of Birmingham and become an exemplar for inclusive economic growth.”

Lendlease, a leading international property and infrastructure development company, has been selected following an OJEU Competitive Dialogue Procurement process. Lendlease has delivered major developments across the UK including the iconic Bluewater shopping centre in Kent, the 2012 Athletes’ Village and is continuing work on International Quarter London, a major commercial scheme in Stratford.

Dan Labbad, CEO, Lendlease, Europe, said: “Smithfield is the birthplace of Birmingham, known for its markets which have always been at the heart of the city. Much like Birmingham itself, the area is brimming with creativity and opportunity. Our plans for the redevelopment will respect this heritage and bring more jobs, homes and environmental benefits to the area and the people of Birmingham.”

The redevelopment of the area, which is twice the size of Brindleyplace, is expected to take 15 years to complete. The first phase of the scheme will include new homes, the new retail markets building and public realm.

The City Council will now work with Lendlease to finalise the terms of the partnership, commence the preparation of a planning application and produce a business plan for the site’s redevelopment before the formal award of the Birmingham Smithfield Development Partner contract. This is anticipated to happen by late 2019 with development expected to commence in 2022.

If you are interested in finding out more about key infrastructure trends today, particularly in the Midlands, you may wish to attend the flagship infrastructure exhibition at the NEC in April 2019 : UKIS 2019