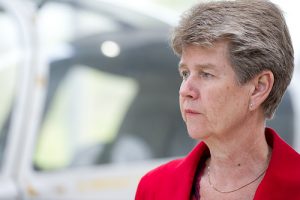 Capital investment and infrastructure projects like the South East Wales Metro transport system, a City Deal for the Cardiff Capital Region and the Swansea Bay Tidal Lagoon are vital to boosting Wales’s economic recovery, the Finance and Government Business Minister Jane Hutt has emphasised to the UK Chancellor.

In a letter to George Osborne ahead of his Spending Review and Autumn Statement on 25 Nov, the Minister calls for him to re-think the UK Government’s plans for further cuts in public expenditure.

The Minister said much needed investment in infrastructure, maintaining and developing economic capacity and productivity is essential to achieve a balanced recovery.

The Minister also called for greater financial flexibilities to enable the Welsh Government to manage a further period of difficult financial settlements.

The conference heard how the Minister had highlighted to the Chancellor investment opportunities where there is scope for joint action between the UK and Welsh Governments.

The Metro System in South East Wales, a City Deal for the Cardiff Capital Region and the Swansea Bay Tidal lagoon all had the potential to provide an important boost to economic growth and bring significant benefits to Wales and the whole of the UK.

In addressing the conference the Minister said the Welsh Government would remain steadfast in its commitment to explore every opportunity to increase the funding available for Wales in support of its infrastructure ambitions for Wales.

Jane Hutt, in her letter to the Chancellor, wrote:

“We have seen unprecedented cuts to public expenditure over the last five years. Over this period, the Welsh Government’s budget has reduced by 8% in real terms. This equates to £1.3bn pounds less to spend every year on promoting economic growth and providing vital public services for the people of Wales.

“We would urge you to reconsider the UK Government’s plans for further cuts in public expenditure.”