The latest designs for Old Oak Common station, slated to open in 2026, have been revealed by HS2 minister Nusrat Ghani.

The government has unveiled images of the planned Old Oak Common, featuring a vast public atrium, a new public park complete with water features, and over six kilometres of underground platforms.

The government estimates that the station could provide support for around 65,000 jobs and 25,500 new homes. It is expected to be the UK’s ‘best connected rail exchange’ when it opens, with approximately 250,000 passing through every day. It is also hoped that in the future it could be connected with the west of England and Wales.

HS2 trains aim to cut down journey times and improve services, especially into and around London. Projects are also planned in the Midlands and Manchester, and universally feature modern design and feedback from the public.

The design of the building is intended as a mix of old and new, with a roof design inspired by the area’s industrial heritage with modern escalators and connecting walkway bridges inside. 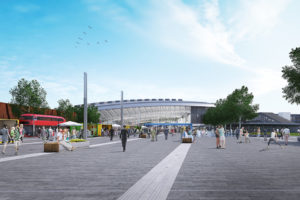 The industrial roof and green spaces.

The station is being designed by Architect WilkinsonEyre lead by WSP, and will be built at the site of the former Great Western railway depot at Old Oak Common, which is currently being cleared ahead of construction.

HS2 Minister Nusrat Ghani spoke optimistically about the station, saying: “HS2 will be the backbone of Britain’s rail network, unlocking regeneration and economic growth across the country, while improving journeys for passengers.

“These designs show how Old Oak Common will set world-class standards for the future of stations. The task for our designers and engineers now is to take these ideas from the drawing board to reality, building an iconic station that is accessible, safe and open to all.”

Locals have been invited to give feedback on the designs, which will be on display at venues around the area this February.

If you are interested in finding out more about key infrastructure trends today, you may wish to attend the flagship infrastructure exhibition at the NEC in April 2019 : UKIS 2019