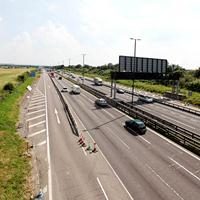 The transport secretary has confirmed funding of £111m for the M6-Heysham link road,a project which was first confirmed in 2009. The new road will complete the connection from the M6 at Junction 34 to the Morecambe Bypass, improving access to the Port of Heysham in Lancashire. The link has been in the pipeline for several years. It was originally approved in 2009 by the previous government, and was again given permission to proceed in 2011. It was the largest of a number of road and rail projects announced by transport secretary Patrick McLoughlin. Other measures he announced include £49m from the local pinch point fund for 25 improvement schemes at bottleneck points. The money comes from a total of £170m earmarked for the scheme over two years – a sum announced by chancellor George Osborne in the 2012 autumn statement. The local authorities set to benefit from funding allocated today are Birmingham, Blackpool, Bracknell Forest, Cheshire West and Chester, Cornwall, Coventry, Cumbria, Darlington, East Riding of Yorkshire, Essex, Hampshire, Lancashire, Leeds, Leicester, Newcastle, North East Lincolnshire, North Somerset, Northamptonshire, Oldham, Oxfordshire, Salford, Southend on Sea, Stockport, Warwickshire and Wolverhampton. Mr McLoughlin revealed that the railway line between Wigan and Bolton will be electrified, at an estimated cost of £37m, allowing high capacity electric trains to run from Wigan to Manchester Airport and Manchester Victoria. The announcements also included a further two major roads projects: a £30m new junction to be built on the M55 north of Preston; a £20m extension of the A1 Lobley Hill to Dunston improvement scheme.