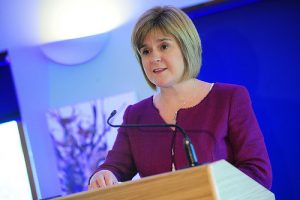 The First Minister chaired a meeting of the Cabinet to discuss the Scottish Government’s next steps following the EU Referendum result.

In addition, regular contact will continue with the EU and, as was planned, Fergus Ewing, Cabinet Secretary for the Rural Economy, will be attending the AGRIFISH Council in Luxembourg on Monday 27 June and will meet EU Agriculture Commissioner Phil Hogan where he will raise the concerns of farming community in Scotland. He will meet with other EU Ministers to demonstrate that the EU remains a priority for Scotland.

For the full speech, visit here.

“We have had a very full discussion about the result of the EU referendum, its implications for Scotland and the steps we need to take in the days, weeks and months that lie ahead to protect Scotland’s interests.

“Cabinet expressed its pride in the vote in Scotland, the emphatic vote in Scotland, to remain in the European Union. The Cabinet also shared the deep disappointment at the UK-wide result that is clearly felt by a majority of people across this country, and we are determined to act decisively but in a way that builds unity across Scotland about the way forward.

“As I said yesterday a second independence referendum is clearly an option which requires to be on the table, and it is very much on the table. To ensure that option is a deliverable one in the required timetable steps will be taken now to ensure that the necessary legislation is in place and Cabinet this morning formally agreed that work.

“However most of our discussions this morning centred on what we can do in the here and now and in the negotiations that lie ahead, to protect Scotland’s relationship with the European Union and our place in the Single Market. Cabinet agreed that we will seek to enter into immediate discussions with the EU institutions and the other EU member states to explore all possible options to protect Scotland’s place in the EU.

“In doing so, we are determined to draw on as much support and advice from across Scotland as possible and I confirm today that over the next few days I will establish an advisory panel comprising a range of experts who can advise me and the Scottish Government on a number of important matters – legal, financial and diplomatic. It will also seek to encompass voices from across the political spectrum in Scotland and indeed different views on Scotland’s constitutional future. I will say more early next week about the membership of this expert advisory panel.”