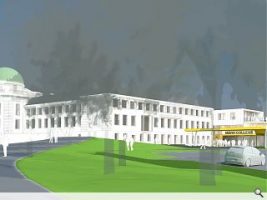 Kier Construction has been appointed to deliver two new schools, as part of a £57m design, build finance and maintain package on behalf of South Ayrshire Council and hub South West Scotland.

BDP designed Marr College, Troon, and Ayr Academy are the latest builds to benefit from the latest phase of the Scottish governments Schools for the Future programme.

The former will see an existing B listed school refurbished in phases with a new three storey wing built to the rear, connected on all floors, to raise capacity from 1,033 pupils to 1,360. The existing school will remain open throughout the proposed works which includes a separate sports hall for shared community use.

Ayr Academy meanwhile will relocate to a new build on the Craigie Estate, catering for up to 1,300 pupils and including its own integrated sports block.

Councillor Robin Reid, portfolio holder for resources and performance at South Ayrshire Council, commented: “It’s a very exciting time and, subject to planning approval being granted later this year, work can go ahead to create two fantastic new schools, delivering a top-class, teaching and learning experience for the 21st century and beyond.”

Work is expected to get underway on both schools in tandem by the third quarter of 2015 with Ayr Academy opening its doors first in spring 2017 and the more complicated Marr College following in summer 2018.