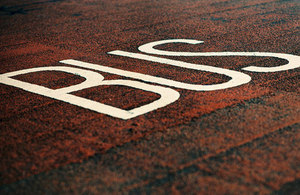 A new rapid bus network for Bristol will be built after the Department for Transport announced £34 million funding towards the project.

“The Bristol Metrobus will provide a step change improvement for public transport serving not just in the city itself but also surrounding communities. Buses will be able to get around quickly, travelling along dedicated busways and priority lanes around Bristol and into the city centre. The new link will stimulate economic development and link communities with jobs.

Our £34 million investment towards the network shows we are serious about funding the infrastructure needed in this country to drive economic growth.”

The Metrobus will encourage car drivers coming into Bristol to shift onto public transport. Existing bus services in the west of the city will also be able to use the new infrastructure with faster travel times.

The rapid transit scheme will provide a new bus service from the south west of the city to the centre along a new 2.5 mile segregated busway from the Long Ashton Park and Ride site. The dedicated busway follows former rail routes and will feature a new bridge over the Bristol to Portishead rail line. The city centre section will run on existing roads with added bus priority measures including bus lanes and upgraded junctions.

The Department for Transport will fund up to £34.5 million towards the £45 million total cost. The work will be completed in April 2016.