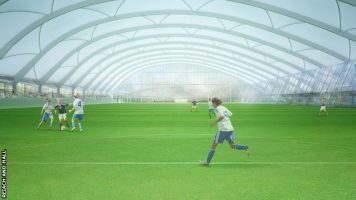 Heriott-Watt University is preparing to kick-off tendering for Scotland’s new National Performance Centre for Sport. The £30m multi-sport facility is being constructed to help Scotland’s athletes excel at an international level and will be built in the parkland setting of the University’s campus. Early next year an OJEU will be published calling for firms to prequalify for the main build and playing surfaces. The present programme being worked to is for construction to get underway in June with completion due in March 2016. The centre has been designed to offer high performance support for football, rugby and volleyball and will feature a covered Hampden park replica football pitch. Scottish architects Reiach & Hall has designed the centre’s main roof, taking inspiration for its angle and trajectory from what is recognised as one of the greatest goals in football history, Brazil’s Roberto Carlos’ strike against France in 1997. Included will be a full sized 3G football pitch with seating for 500, two goalkeeper training areas with floodlights, two grass rugby pitches, five grass football pitches, three outdoor tennis courts, a nine court sports hall. The complex will also boast a 100-station gym, hydrotherapy, and strength and conditioning and treatment areas. It is being funded with £25m from the Scottish Government and £2.5m from each of Heriot-Watt University and the City of Edinburgh Council. To record interest in bidding click here or contact Richard Kinghorn, procurement servcies, Heriot-Watt University Group. Tel: 01314513704.